Merry Christmas to All

We're in the land of the Kea, a gorgeous and overly inquisitive bird. 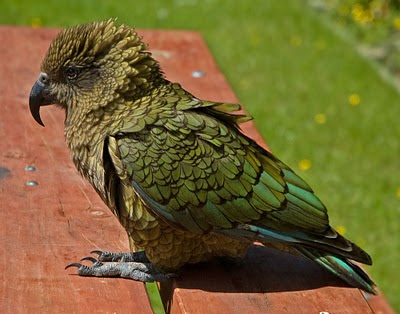 This is one of the more common flightless birds in New Zealand called a Weka. This one was eating road kill and dodging cars at the last second like it was no big deal. 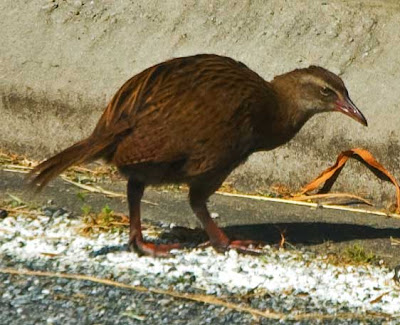 Arthur's Pass looking up the Otira river. The flowers are one of the Foxgloves, I think. 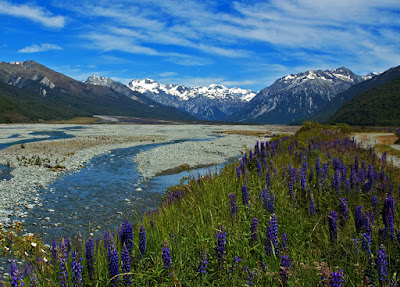 This is the Devil's Punchbowl falls, my first hike in NZ if you don't count the Christchurch botanical gardens. 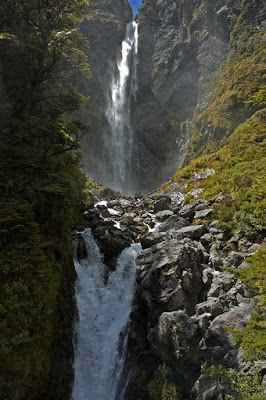 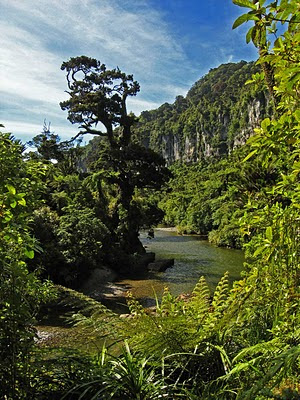 I'm not used to looking up and seeing ferns as big as palm trees. There are some Hobbits in there somewhere. 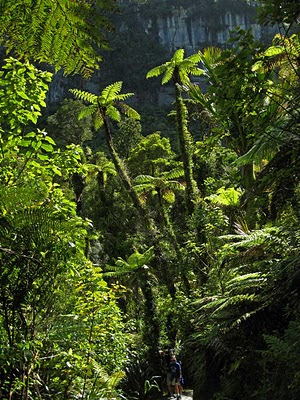 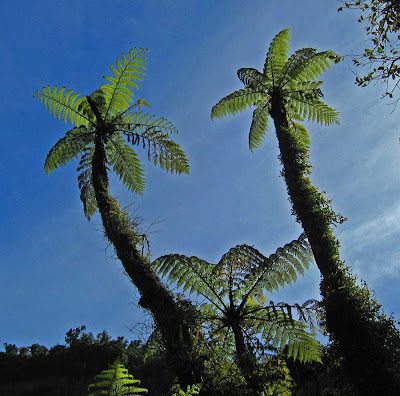 The NZ Christmas tree grows all over the place. I don't know if people plant them in their yards or just leave them in place when they build the houses. There's no need to plant exotic ornamentals when the weeds look like this. 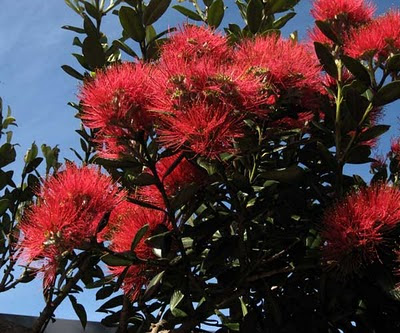 Merry Christmas from all of us. We wish you were here...And so do you! 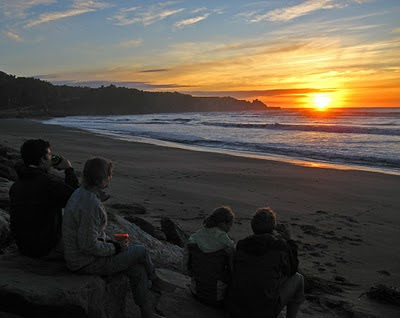 Santa Claus is the only fictional character in the world with a higher recognition factor than Ronald McDonald. Children love him and dream of his visit to their home in the wee hours of Christmas.

In many cultures snacks are traditionally left for Santa. These can be cookies and milk or they can include a small snifter of brandy along with a few carrots and celery sticks for the reindeer. After a night of house to house careening around the planet and pounding brandy to stay warm, Santa is probably totally toasted as he sits in the driver's seat. Think about the structural soundness of your roof and the possibility of a drunken fat guy crashing a team of reindeer through your attic.

Santa is an obvious communist as well. I know of no more entrenched wealth redistribution system than his lavishing billions of dollars worth of merchandise upon children who haven't paid a dime for any of it, and thanks to those danged Liberals and their child labor laws, it is not even legal to make them work to earn that new play station, even though it was probably assembled by children in some Asian nation with sensible worker protection laws, like say China. Elves, you say? Yeah right. Santa wears a lot of red, have you noticed?

Santa's fat and proud of it. At least he hides one of his worst habits from the kids. He still smokes. You only catch him with his pipe on older traditional cards but we know it and he should own up to it. He rides around shouting at his poor reindeer drinking, feasting, and spreading the wealth like a madman, and what's with all the ho's?

I'm guessing that like so many other wives of celebrities, Mrs. Claus stays with the old coot for the good of the elves. There's no other reason.

All in all, except for that junk food thing of his, Ronald McDonald might be the better role model. Except he hangs around with puppets and children and no adults. Hmmm?

PS: There's even some research
Posted by Whites Creek at 10:01 AM 1 comment:

"I Am Your Enemy"

Understanding brings a certain sadness and realization about the cowardice of those we elect and how our country works. It is a continuing theme of mine that we are being constantly lied to and that these lies are abetted by a disabled media whose main duty is to praise Pollyanna for emptying the chamberpots. Today's reading assignment is an insider's dish on why, in the fight for "Truth, Justice, and the American Way," It is the Joker who is winning.

I am your enemy. That you don't know this is understandable: after all, people like me prefer it that way. But until you understand just what you're up against and why, you're going to continue to lose, and look like fools in the process

No One is Going to Save You Fools
Posted by Whites Creek at 7:27 AM 1 comment:

Since the Liberal Media Didn't Bring you This...

Just last week, Republican leaders in the House summoned more than 100 key lobbyists for the financial industry to a "pep rally," and urged them to redouble their efforts to block meaningful financial reform. Not that they needed the encouragement. These industry lobbyists have already spent more than $300 million on lobbying the debate this year.

You knew all that, right? That was a quote from your President, after all. As near as I can tell, our President is a kind, thinking, literate, bad ass dude, and a great leader. If only he had some courageous people to lead!

US Government Report: China's #1 Export to the USA...Unemployment

Want some scary stories to read? This will frighten you as much as anything ever. This is from a report by the United States-China Economic and Security Review Commission and frankly tells us where our jobs have gone...

China has consistently used the value added tax as an instrument of industrial policy, applying the VAT selectively to penalize imports and to encourage exports. The VAT, which has been adopted by 140 countries, including most industrialized countries other than the United States, is applied to manufactured goods at each
stage of production. China levies a 17 percent VAT on the value of most goods. However, this 17 percent rate is rebated selectively on exports and applied to all imports.

Ugly stuff and why have we stood around and let this happen?

Export-led growth policies pursued by China and other industrializing nations have inevitably led to excess capacity in many products, notably steel and automobiles, which has contributed to declining manufacturing jobs and production in
many market-oriented countries, including the United States. Problems arise for China’s trading partners as China exports its excess capacity at prices that the rest of the world cannot match. For example, in 2008, China accounted for 38 percent of the world’s crude steel production (about 500 million tons), compared to only 7 percent for the United States, and China’s excess capacity of steel is
greater then Japan’s entire yearly output.352 Such exports also exacerbate the global economic downturn, as China essentially exports unemployment

This is a long and wonky report but essentially says what the USA needs to do to turn around our employment picture:

And then there's this:

China’s Cyber Activities that Target the United States, and the Resulting Impacts on U.S. National Security

• The Commission recommends that Congress assess the effectiveness of and resourcing for law enforcement, defense, and intelligence community initiatives that aim to develop effective and reliable attribution techniques for computer exploitation and
computer attacks.
• The Commission recommends that Congress urge the administration to develop measures to deter malicious Chinese cyber activity directed at critical U.S. infrastructure and U.S. government information systems

Geez! There's report after report at this US Government web site that both scares and angers me. Pick a subject and read for yourself. We don't need to have a jobs summit. We need the gumption to do the obvious. Quit sending our manufacturing strength and jobs to China.

And now here's more scary topics posted at the links I gave you:

Among the topics addressed in the 367-page Report are:

China’s increasingly aggressive espionage efforts to obtain U.S. secrets and technology for the benefit of China’s military and its economy.
China’s stepped-up cyber espionage and cyber warfare capabilities that constitute a growing threat to U.S. computer networks.
China’s extensive use of foreign propaganda and China’s efforts to influence public opinion and policymaking in the United States.
China’s detailed industrial policy designed to attract foreign investment and production and to create “national champions” to compete on a global scale.
China’s use of subsidies and other trade-distorting measures in violation of its international commitments.
China’s role in the creation of the economic imbalances that that helped produce the global financial crisis.
The expansion and modernization of the Chinese navy and its effects on U.S. access to the waters around China and Taiwan and the likelihood of a maritime arms race.
The use of new and more sophisticated methods by Chinese authorities to control the Chinese news media and the Internet.
China’s activities in Afghanistan, Pakistan, and Central Asia.
Mainland China’s increasing influence in Taiwan and Hong Kong.
The effect of China’s policies on the economy of the upstate New York region.
Posted by Whites Creek at 3:21 PM 2 comments:

On a day when a peer reviewed scientific publication notes that Miami, Savannah, Charleston, and New York City will be underwater in before this century is done, and conservatives have come out with pro rape and anti abortion votes in the Senate as another 30,000 combat troops are being committed to Afghanistan, the number one news story in America is, "Tiger Woods Got Women...Lots of 'em."

I don't play golf. It seems like a stupid game to me. There's no defense and everybody gets their own ball. It's sort of a grandiose version of pitching pennies combined with a drinking game.

The highest endorsement players over the last few years have been Tiger Woods and Phil Mickelson, who are seen as the good guys, and John Daly, seen as an out and out party boy, womanizer, and drunk. Tiger is undergoing a slight image modification at the moment. He's in trouble for getting caught using his driver in the rough.

Every day it seems another stunningly attractive bimbo pops up in front of the cameras playing a voice mail message from golf's golden boy. It remains to be seen how this will affect Tiger's billion dollar revenue stream of purses and endorsements. Publicly, sports and news pundits are "Tsk, tsking" about Tiger, but I've seen golf carts, and I know that they have spots for two golf bags and four beverage containers. You can try and tell me that male golfers as a whole are disappointed with Tiger but I know differently. They're thinking, "Dang! I've got to get me some of those clubs."

And I know danged well that Tiger's Nike golf shirts are flying off the shelf. That would be the ones with the slogan that says...

Disclaimer: No Golf cliches were harmed in the making of this bog post.
Posted by Whites Creek at 7:59 AM 2 comments: