Walk on the Last Day of April

I went for my usual morning walk and remembered to take a camera.
These cucumber trees are just budding out around a small beech. They're wild magnolias. 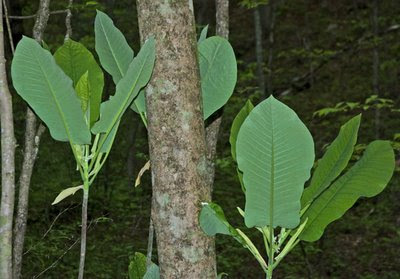 This dog hobble has an amazingly profuse bloom this year. They actually make good landscape plants in a moist location. 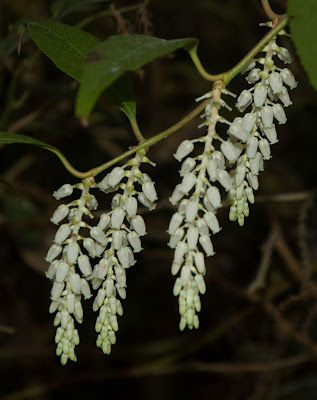 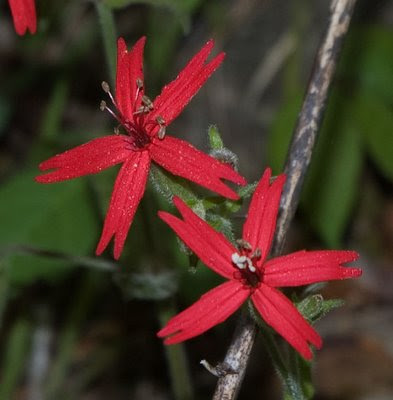 Mandrake or mayapple grows in colonies and is all over the place but most people never see the blossom. 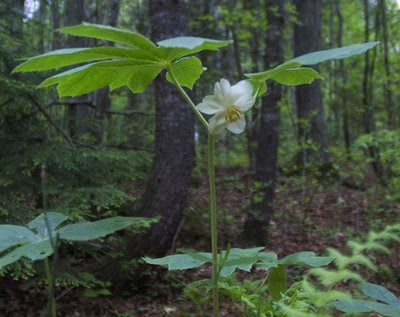 Spicebush is going off, but the fragrance hasn't developed yet. 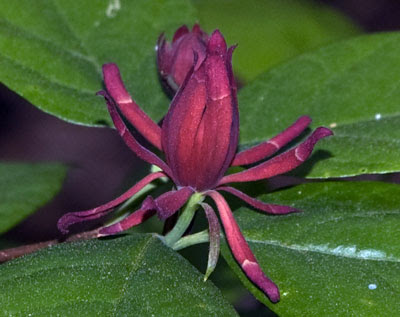 And I need help with this one. 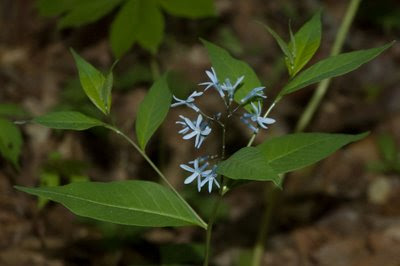 Posted by Whites Creek at 12:28 PM No comments:

Although there were racist voters in every state -- and although there were also voters in every state who voted for Barack Obama because of his race -- respondents in more rural, less educated states (like Arkansas or Tennessee) were more likely to say that they had voted for John McCain (that is, against Barack Obama) because of the race of the candidates.

Tennessee Democrats ran away from Barack Obama as fast and hard as they could and they lost big. Both houses of the Tennessee legislature are now controlled by Republicans. They control the committees, they control the issues, they control the future. The state Democratic party, under new leadership, seems to be squabbling with the faction that lead the charge to defeat and wants to continue the old way of fat cat donors and party bosses. In a telling statement of reality the Democratic Party had to move it's Labor Day celebration away from Labor Day, a tacit admission that not only does the working person no longer exist as a political force, but that the party is in muddled disarray. The party of the grass roots has forgotten that it is the party of the grass roots.
Barack Obama is our President today because of Dr. Howard Dean and his 50 state strategy, which concentrated on building from the bottom instead of the top down sytem that caters to big money...That and the fact that Obama was the best candidate in the race by an exceptional margin. So much so that Obama won handily without resorting to the least bit of negative campaigning against the person of John McCain.
(Republican strategists must have shuttered awake during the campaign knowing what a Swift Boat style attack would have done to their candidate, particularly one based on truth instead of the fabrications used against Kerry.)
Tennessee Democrats missed their chance to build a modern state party during the Obama presidential run in what seems from the outsideto be  a doomed attempt at keeping the good old boy fat cat power structure intact. It is as if they got together, looked at the election carnage in Tennessee, and said, "Well...That didn't work. Let's do the same thing all over again!"
Whie the state party was running away from Obama, something really amazing was happening. Obama raised more money in Tennessee than did John McCain. It was mostly in small donations and generated by the internet. In a demonstration of their relevance, Progressive  Tennesse bloggers mounted an improptu campain lasting a mere three days which signed up over 100 donors and raised over $4000.
I keep waiting for that lightbulb to turn on inside the collective heads of the old guard. The Democratic Party cannot continue to exist as Republican Lite, trying to win elections with the slogan of "We suck less than those other guys!" Obama won by using Howard Dean's tools and empowering the grass roots. Most importantly, he listened to them.
So far the state party is clinging to the party boss stereotype, reclaiming control from an attempt to begin a movement that returns power to the local party. The strength of the Democratic Party is in numbers. It is time to use our strength to move Tennessee toward an economically viable state, with a healthy environment, and an excellent public school system.
It's time for us to make the Tennessee racist redneck stereotype a thing of the past. The newneo-conservative Republican party isn't going to do that, and neither is the old Democratic Party.
Peace,
Steve
Posted by Whites Creek at 8:34 AM No comments:

Posted by Whites Creek at 9:10 PM No comments:

This is why you buy native plants from a good nursery. This is a flame azalea from Moutain Mist Nursery in North Carolina. Several others are about to bloom as well. 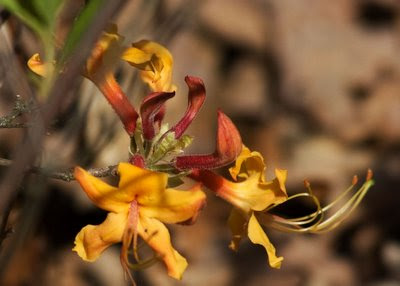 Posted by Whites Creek at 8:13 PM No comments:

This Buckeye is about to bloom. We have several varieties but I like the red/purple ones the best. This is from our Easter walk. 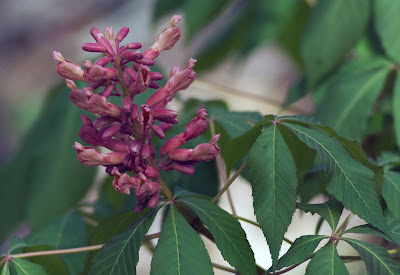 Who needs a Portuguese Water Dog when you have a Tennessee Water Dog? 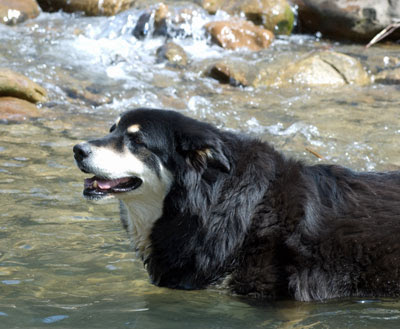 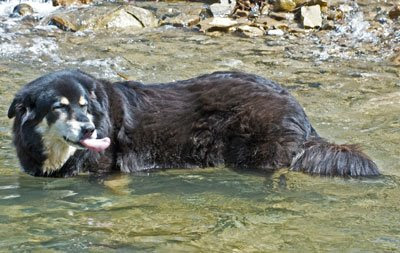 Ok, so she's a pound puppy grown old but she loves the creek anytime the water isn't hard frozen.
Posted by Whites Creek at 11:17 AM No comments:

The Republican Party thrives as a party by making elections about one issue. Two at most, since you have to include the "gun in every pocket" distortion of the second amendment. With the realization that a rather large number of Republicans are Gay, have Gay relatives, Gay friends, or Gay children, the issue of protecting marriage (Irrationally done by keeping certain people from being able to marry) is crumbling under the weight of second thoughts and legalization by several states.
It must be really difficult to maintain enough sanity to function day to day while proclaiming one's self a Christian, villianizing Liberals, while trying to ignore the obvious fact that your self proclaimed religion was founded by the greatest Liberal to ever live on Earth, Jesus of Nazereth.
But anyway, Republicans, needing something to drive the electorate's fears (Gay people are simply not that scary), have lurched from being scared of Gays and Liberals to being terrified by the Socialist under their beds.
I know the sane among you are asking...
"What part of 'Government Of the people, By the people, and For the people',"
don't you understand?
The Constitution of the United States of America enshrines a Socialist Democratic system of government, with extra built in checks and balances to keep it from lurching into totalitarianism when this or that faction momentarily gains an overwhelming majority as happened in 2002.
Our system of government is a little bit conservative and a lot socialist. Fully conservative government is known as Fascism, which is another word ignorants throw around, thinking it covers the pimple of racism erupting on their noses.
So by means the Internet, the greatest socialistic invention of modern times,  I direct you to a fine bit of ironic observation...An account of a town meeting whereby a Republican Congressman rants about the very thing he needs to survive...Socialism!
Crazy Town
Peace,
Steve
Posted by Whites Creek at 8:11 AM 1 comment:

Danged eagles are going to force me to buy a longer lense. Their nest looks to be 10 or more feet across and sits in a dead white pine above the creek on the Rhea County side. More than that I'm not telling. I don't know if you can tell from this shot but both birds are in the nest. One of them is just to the right of the tree trunk. 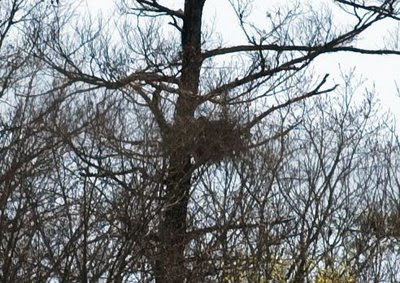 Black vultures are amazing flyers and are putting on a show for their courtship ritual. There were three birds in this flight. Two of them seemed to be in aerial combat while the other stayed close by. 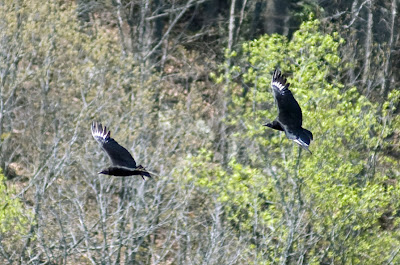 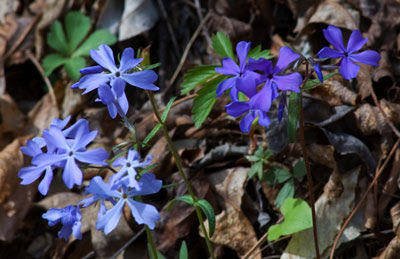 I don't have a clue what these beauties are. The flower stem is about six inches high. 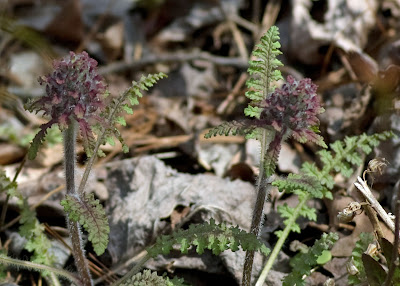 Evening Mist after an April Storm 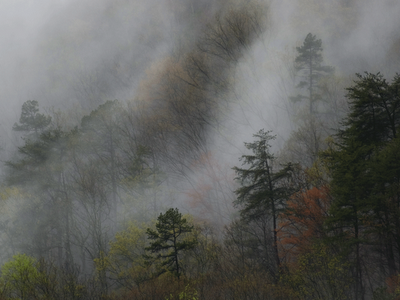 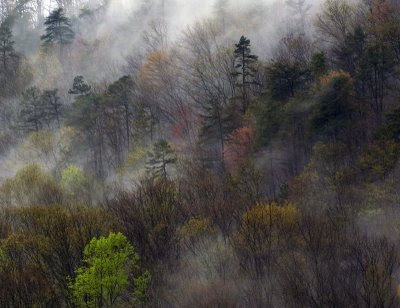 Posted by Whites Creek at 6:42 PM No comments:

"The Oceans are cooling", Other lies and Why they tell them

With great sanctimony and firm chinned voice, George Will spoke out on national TV and stated that climate change was a lie because the oceans were in fact cooling down, not warming up.  This was a plain and simple lie. Mr. Will is either deluding himself with the starkly fearful need for climate change to be "not happening" because his entire career is bassed on such fear and self delusion, or he is a liar.
Some facts are in order...The oceans are really big and it is tough to put together enough accurate measurements to get and average temperature tracked over a long period of time. Some spots in the oceans are in fact cooling down, mostly due to the melting of large bodies of ice and the massive runoff currents flowing from the Arctic and Antarctic ice packs and others. The concensus of scientists is that the oceans are warming up with tragic velocity.
Other symptoms are even more stark in their obviousness...
Glacier National Park is currently predicted to be glacier free within the next decade or so. Want to see a glacier? Go quickly or they'll be gone.
The Antarctic ice shelf is cracking up.
The Arctic Ocean will soon be ice free. Oddly, rather than realizing that this will mean staggering changes in life all over the world, flooding millions out of their homes and causing entire coastal nations to disappear, and taking drastic steps to reverse the trend, conservatives are looking for ways to make money from it.
Yep...Some people will benefit from worldwide disaster. Everyone else will lose and lose big.
In the world of what passes for a modern conservative like George Will, that's all that counts.
"I will make money," say people like George, "Therfore it is good for me to lie to you."
Peace,
Steve
Extra Reading
Posted by Whites Creek at 7:30 AM 1 comment: 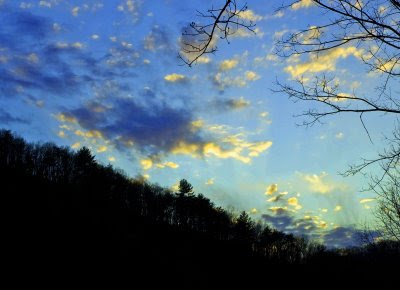 Posted by Whites Creek at 8:25 PM No comments:

Nice to have a President again

This is our President
Posted by Whites Creek at 9:58 PM 1 comment: