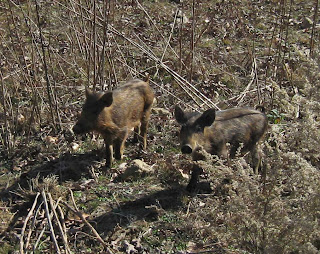 The adults were solid black except for one silver tipped old lady. I expect full blooded European boars to be black, even as babies. These may have some domestic hog in their lineage which is likely, or  I could be mistaken, which is somewhat less likely but known to happen on rare occasions.

We saw these beasties yesterday on a neighboring farm. They are definitely not completely wild. 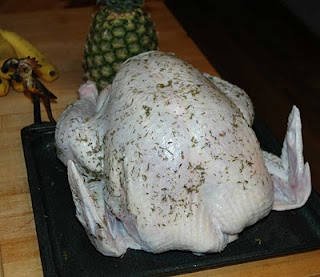 OK, Three if you count the parrot. 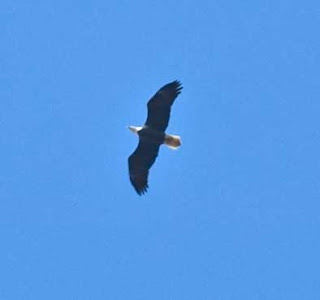 We had five eagles playing above the house most of the day. They were loving the wind direction and apparently have a carcass close by to feast on. They aren't having to spend any time hunting at the moment, so they can play fight and talk to each other starting very early in the morning.
Posted by Whites Creek at 2:50 PM 1 comment:

Where I've Been For the Last Few Days

Just another southern blackwater river flowing through a swamp with owls, turkeys, otters, and near as we can figure it, a bear. 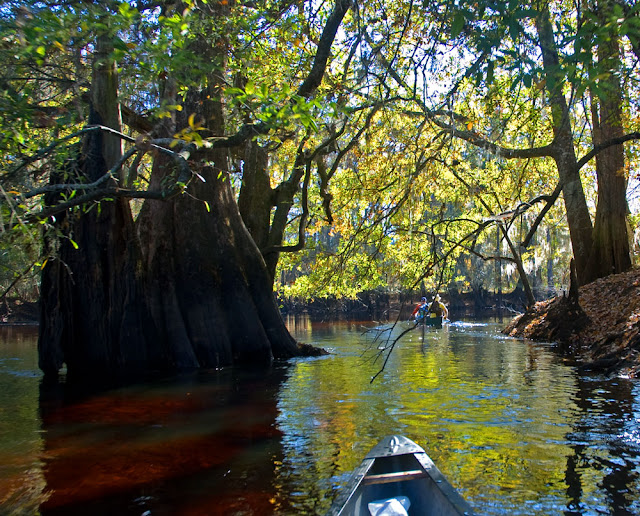 This is the Black River near Kingstree, SC. We were stopped at one of the bridges over it and looking at our maps to figure out where we should put in, when a guy in a pickup stopped on the road and rolled down his window. That is either a good sign or a bad sign on trips like this. Mr. Kirby wanted to know if we would like him to open the gate so we could get closer to the river. "I just close it 'cause some people trash it out so bad," he told us. I know exactly what you mean. Mr. Kirby.

The beavers were apparently mad at us for camping in their dining hall the first night. It sounded like they were throwing refrigerators into the water for most of the first half of the night. I've never encountered that kind of sustained tail slapping. Usually it's one big "pow-ka-thunk" and they are gone.

We misread the guide book, which turns out to be somewhat suspect anyway, and set our shuttle vehicle 8 miles closer than we intended but we still covered about 30 miles in three days and two nights, a pretty laid back trip for us. 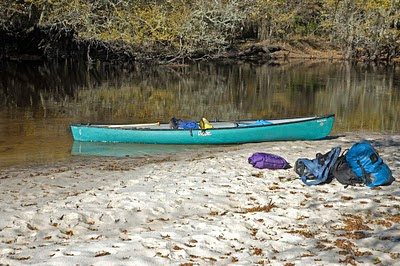 The canoe I used is called a Sojourn. It's a solo touring boat that is the perfect choice for this kind of paddling  with a load of gear. I've had it for ten years and finally got it out on a trip worthy of its style. 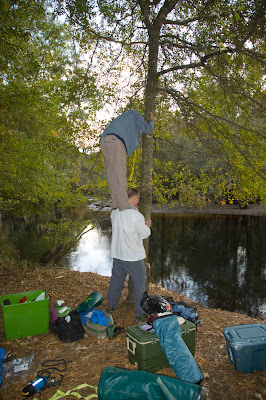 Yeah, well...You put up tarp lines your way and we'll put up tarp lines our way. We did scare the rain off and an 80% chance of thunder storms turned into a ten minute shower under the lunch tarp. We don't usually take ultralight trips. All of us have done that and now prefer to camp in style with fine dining and appropriate spirits. This trip was sponsored by LaPhroig Scotch, a 23 year old rum, and some other delicacies. I think we should write the culinary guide to canoeing in the South.
Posted by Whites Creek at 10:01 AM 5 comments:

Should There Be a Hunting Season for Sandhill Cranes in Tennessee?

I couldn't do it unless I was starving and had  run out of nuts, berries, twigs, and insects. 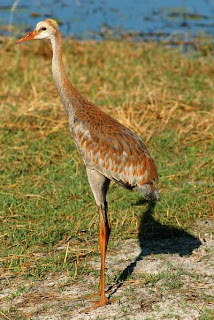