When the Rains Come 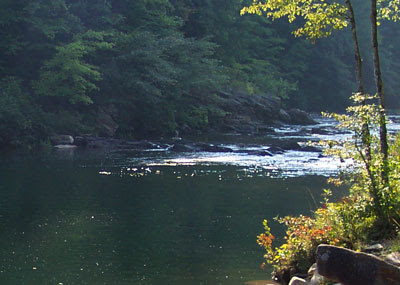 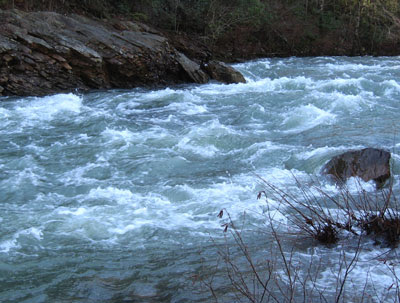 Posted by Whites Creek at 9:01 AM No comments:

If it's Tuesday, there must be Eagles

I'm so sorry you guys couldn't have been with us today.
We had a work day putting up signs and fence posts but we took some time to explore the yard, which through an amazing set of circumstances goes from the top of Walden Ridge to the middle of Whites Creek. We took lunch at the overlook and kept getting buzzed by these two birds who were flying stupendous aerial stunts in tandem at eye level to our perch. They were two immature bald eagles, one of which is just starting to get his color. I apologize in advance for only having a little hiking camera with me.  I thought about posting one of the closer shots but this one tells a better story of what it's like to be a teenaged eagle playing with a friend. 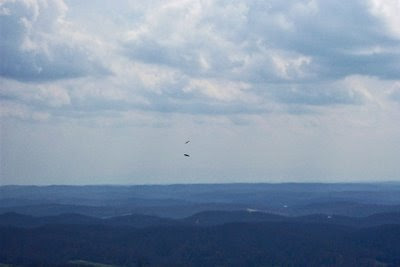 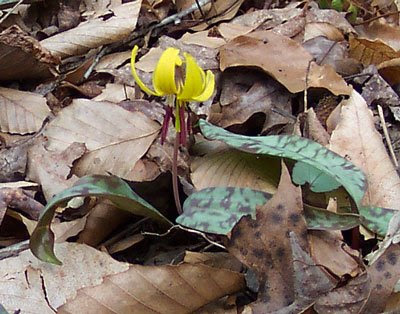 This is Bloodroot. A prize for all spring wildflower hunters. 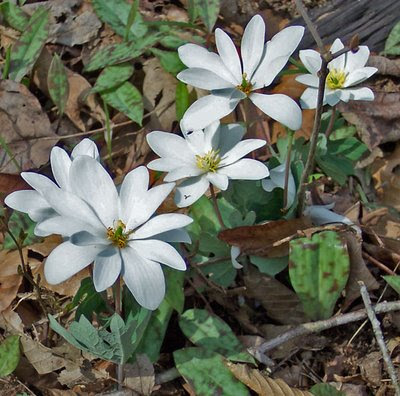 Posted by Whites Creek at 5:04 PM No comments:

The Second Day of Spring

Pictures from Whites Creek in Roane County from our hike today...
This is the pool below the confluence of Piney Creek and Fall Creek. We are standing in Roane County looking at Rhea County and are just a few hundred feet from the Cumberland County line. I'm curious about how the boundaries were drawn back when. I think these were land grant properties and frankly there's no way to get to these bits of Rhea County without going through Cumberland. 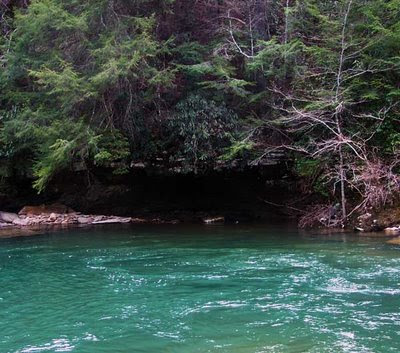 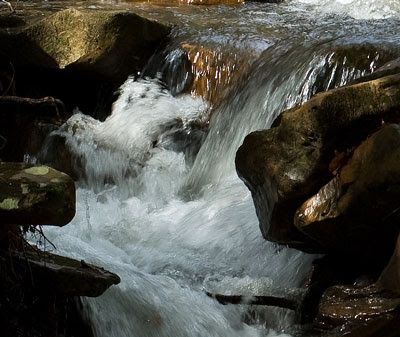 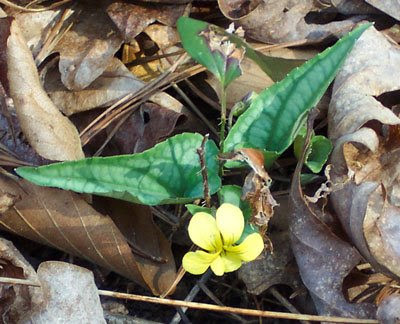 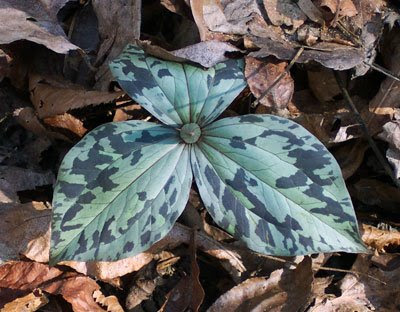 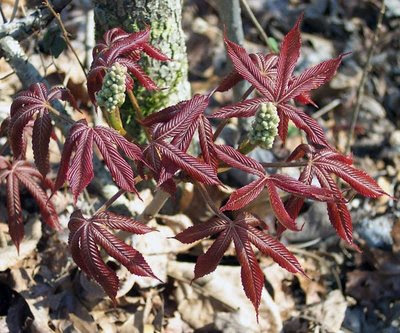 U.S. Fish and Wildlife Service presented their 2008 Recovery Champion Award to Conservation Fisheries biologists, Pat Rakes and J.R. Shute. They are being recognized for their contributions to the recovery program for endangered species.

Since the 1980s, J. R. Shute and Pat Rakes have worked to recover more than 50 of the rarest fishes in Tennessee, Alabama, Georgia, Kentucky, Virginia, Mississippi, Arkansas, and North Carolina. Their organization, Conservation Fisheries, Inc., has developed propagation protocols and technologies for fish-rearing, restored populations in their native streams—and expanded the knowledge of spawning behavior, habitat preferences, larval development, and early life-stage environmental sensitivity. Along with producing host fishes for freshwater mussels and maintaining “ark” captive populations, Conservation Fisheries has saved the smoky madtom from extinction, enhanced the status of species such as the yellowfin madtom, moved several species closer to delisting, and precluded the need to list others

Check out their web site and pay particular attention to that pretty "donate" button...Conservation Fisheries
Posted by Whites Creek at 9:24 AM 1 comment:

So AIG used our borrowed money to pay bonuses to the scumbags who sold the credit default swaps that crashed the world economy. There was an amendment in the bailout bill that was supposed to stop that possibility but it got removed in the legislative process. Senator Chris Dodd was the Bill's sponsor and he's getting blamed for it.

That's not fair! Senator Dodd has no clue what happened to the amendment. It disappeared in the House and Senate Conference committee which is supposed to resolve the differences between House and Senate versions of bills and send them back to the two houses of Congress for final passage, which is normally a mere formality.

I listened to three big media news shows where the anchor looked sincerely at the camera and got this wrong. These people are hurting our country. This stuff isn't that hard to get right..And moreover, when a news outlet gets something wrong they should make as big a deal looking sincerely into the camera and correcting their misinformation before they go onto their story about a shark swimming in the ocean off Australia.

So we have two problems...Our big national media...The one sanctified and protected by the Constitution because of it's immense value to the democratic process...sucks big time. Our other problem is that our Congressmen and Senators...The ones we elect to make our laws...have no idea who is making our laws.

Think about that for a second. We live in a country where one of the 100 most powerful people in government, the cosponsor of the amendment in question, has no clue how it got removed in the Senate-House conference committee -- or if it was taken out of the legislation even before it made it into conference.

Let's also note that the original bailout bill was a Bush Administration creation and that this was simply a fix to that monstrousity that was added to the current administration's Stimulus Bill. The real blame goes to Bush but that too is lost in the current story.

The blame game would be amusing if it weren't tragic. It's the car thief blaming the owner for his car getting stolen because the burgular alarm was too easily beaten. So who will take the blame?

Steve
Posted by Whites Creek at 8:19 AM 3 comments:

Rare Plant found in the Gorge

A botanist friend reports that he has found Virginia Spirea along Whites Creek. It is endangered in Tennessee. When I looked at the pictures I thought, "Oh yeah. That stuff."

Check it out.
Posted by Whites Creek at 10:30 AM No comments:

"A toxic but mutual embrace"

Josh Marshall points out something we all know but haven't really faced about our relationship with China.
Posted by Whites Creek at 7:47 AM No comments:

President Barack Obama did a lot more than lift the ban on federal funding for embryonic stem cell research Monday. He came to the startling conclusion that scientific research should be based on science.

This will be a change. George W. Bush spent the past eight years making sure scientific research was based on conservative ideology, political manipulation and whim.

A Dash of Science

We have seen that solar power has come of age but batteries have not. Here is a major advance in quick charging of lithium ion batteries. It could soon be possible to recharge an electric vehicle in as little as 9 seconds. With super fast charging, regenerative braking and fast acceleration become the norm. Weight can be cut down because cars can recharge so quickly that longer trips are no problem. This is really promising.
Posted by Whites Creek at 9:14 AM 1 comment:

Former Columbia/HCA executive Richard L. Scott has launched a nonprofit group called Conservatives for Patients' Rights, which promises a $20 million multimedia ad campaign warning that the country is hurtling toward socialized medicine. Scott, who was pushed out of Columbia/HCA in the 1990s and now runs a chain of Florida urgent-care clinics, said in an interview that he has put up $5 million of his own money to kick-start the effort, with hopes of building a grass-roots campaign.

And did I mention that Zack Wamp is all against having your health decisions made by a central board? That's too funny. Other than the Healthcare PAC money Zach is getting, isn't an HMO a "centralized board" that makes your healthcare decisions?
Posted by Whites Creek at 12:17 PM No comments:

If there is anything that points to the disintegration of the GOP it is their choice of leadership...Whomever that may be...
Posted by Whites Creek at 10:28 AM No comments: