About half this hike is a gnarly bushwhack. I've been wanting to explore this creek but it's about an hour and a half hike to get to it's source, and it's tough to find hiking friends who are up for the challenge. Paul and Floyd were happy warriors in the woods and great company all the way.

Look closely at our first waterfall and you can see the stone stool that probably was a refuge of cool relief in the hot summers of many years ago when the area was inhabited. This falls was 8 - 10 feet, slowed to a nice steady flow after the floods of two weeks ago. 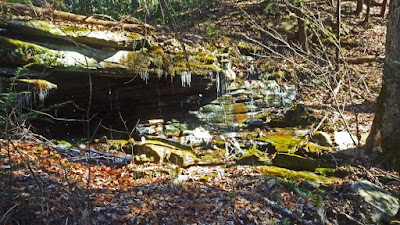 The next waterfall was the largest at around 20-22 feet. It's more the Cumberland Plateau classic  with the sandstone cap over sedimentary layers that will gradually erode back and create a clear drop for the water. It's almost there as it is. 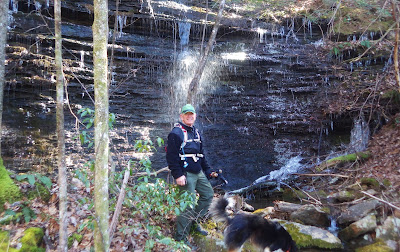 The last big drop before the trail back was around 15 feet. This is the one that made me wish I had brought my Nikon and tripod.  Too much beauty to show with a pocket camera, but maybe you get the idea. 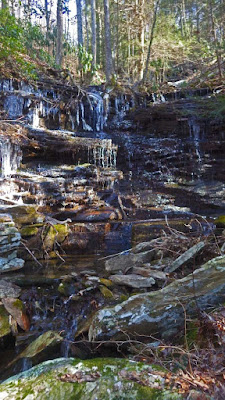 Jump rock gave everybody that little queasy feeling in the gut when we looked over the side into the spring clear water. It's about 35 feet off the water. 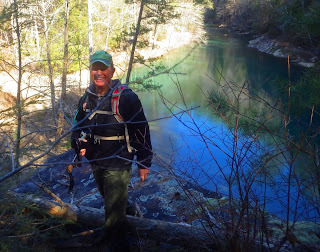 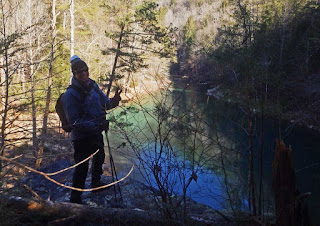 I don't think this is a geocache.  It had certainly been on the mountain a long long time and nobody was the least bit tempted. I suspect there is a pretty boring story about how it came to live there, probably involving a twelve pack and an ATV 20 years ago. We saved the refreshment for a spirited toast back at the house thanks to Paul. Cheers! 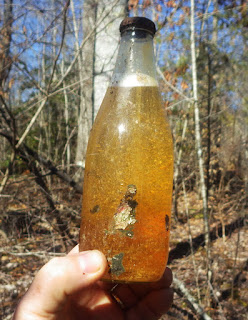 Posted by Whites Creek at 9:49 AM No comments: