One of the downsides to living in a house with lots of glass is that birds think they can fly through it. After cringing for a number of years as the little beauties crashed and mostly died, I studied on how to stop them. We have spectacular views here but that doesn't give me the right to kill things just so I can see the cliffs from my couch. What I settled on has worked extremely well.

There are all sorts of commercial coverings for windows that purport to scare birds away from the glass. They are expensive to do a lot of windows. What I did was identify which windows were the worst and hang window screen on the outside of them. The views are only slightly diminished and we've had zero fatalities on the protected windows. Unfortunately the birds will sometimes, though rarely, fly into one of the remaining areas of exposed glass.

We were sitting at the breakfast table when a very loud thunk startled us. "That's a dead one," I said. Running outside there was a pigeon sized bird lying upside down and motionless on the deck. I picked it up, it was limp and had one eye open and the other closed. Then we saw it was breathing very shallow breaths. We took it to the sunny side of the deck and laid it in a flowerpot as gently as we could so the dogs wouldn't get it. (We are catless here) We thought we were holding a Merlin (Now that I read more, the yellow eye is the giveaway this is a sharp shinned hawk) but that, while it probably wouldn't make it, we should give it every chance. After a half hour there was no change but we left it and went about our morning chores in the yard.

At some point my son came out and said, "That hawk got up and flew off!" He went a few yards to a limb down below the deck and then flew around the house into a tree. I knew that this doesn't necessarily mean they will live but it gave us hope. Just now, a day later, it flew up to the house and landed in a hickory tree, eying the goldfinches on the feeder. Then it flew strongly away. I covered the offending glass with screen as the hawk lay in the flower pot. It is either a juvenile or a female, I'm not enough of a birder to know. I can't tell you how happy I felt when it landed in the hickory tree just now. 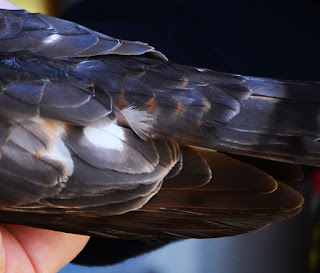 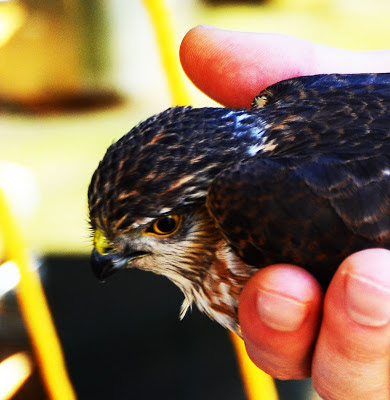