Evidence on the Water

After finding our phone lines had been intentionally cut on Friday, we felt an epic hike would restore our understanding of why we work so hard to protect Whites Creek in the face of people whose "fun" destroys things they refuse to understand. Today was another day where one is called to go outside. We needed some restoration and renewal.
The visual symphony of the gorge is well documented photographically on this site, but there's always something new to discover or see in new light. We've been working on the trail up to this table rock and my photography can't begin to tell you what it's like to walk around behind the pedestal as you think about the massive sandstone rock supported over your head by the seemingly fragile stack of sedimentary rocks your hand is touching. Some of them are obviously loose. The cliff above this level is the edge of the gorge. I believe it has the best view of any overlook for miles around, high enough to view Laurel Branch cut on the Rhea County side but still below the level of the traces of humanity on the far side plateau. You'll have to come out and see for yourself because the photos don't do justice, mine anyway.
Under the edge of the cliff is a huge overhang with the remnants of a stone shack. We've heard various stories about it. Whther it is the draft dodger's hide out from wars in the last century or a moonshiner's shack, it is in a magnificent south facing location worthy of the Anasazi on a smaller scale. The cliff side is home to a plant that John Muir paid notice to on his walk through Tennessee in 1867. This is the "round leaf catch fly" honoring us with a late season blossom. It is in the same family as "Fire pink" which blooms in the spring, and is carnivorous, catching midges and such in the sticky hairs on its leaves. This allows it to gather nourishment from the air, as it were, and survive on this otherwise inhospitable ledge. 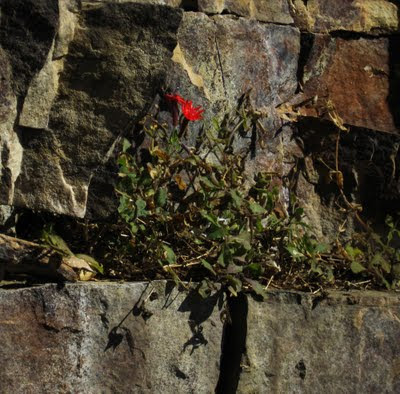 Nature takes its course in the world, whether we like it or not. Descending from the rim of the gorge some 500 vertical feet above, I saw this downy white clutch of feathers floating in a leaf lined pool of water. Unreachable, even with the stick I was carrying to beat back the blackberry canes from my path, I wondered what bird they could possibly belong to? 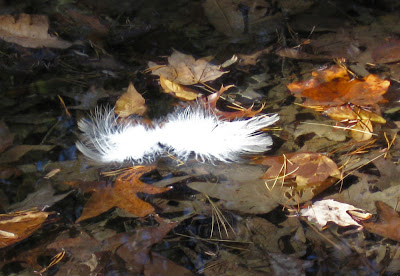 Looking around the path I saw the answer, unusual as it was. One of the large hawks, probably a young redtail, had entered the food chain on an unfortunately lower rung than what it usually occupied. 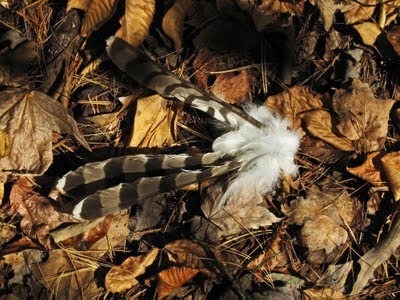 A shrill "scree" call echoed through the gorge from above the trees as I studied the feathers and the fresh blood that told me this was a very recent death and possibly the mate of the bird circling and calling repeatedly above me. What predator could make this kill and devour the 3 to 4 pounds of hawk as well as the hawks kill that had held it vulnerable on the ground? I'm guessing coyote, and maybe more than one.
It's tough out there.
Peace,
Steve
Posted by Whites Creek at 5:14 PM