Casper the friendly dog yapped incessantly in the morning dark. Part of me heard him and part of me thought evil things about dogs in general and tried to stay asleep until the radio started talking. Only partly successful, I grogged up and started the morning routine.

I had forgotten about the barking but my son asked what Casper was looking at as he passed the window I sit by in the mornings. It was several minutes later that I noticed the shadow in one of the trees below the house. I stared at the grey shape just beow my eye level 75 feet away on one of the spindly hickory limbs. The tail hanging down gave away the beast's identity. The cat food thief.

Several years ago, my ten-ish youngest son decided he wanted an animal trap for christmas, we decided that was easy enough, and he was justly proud of the harmless box trap we put on his side of the room on the appropriate morning. He soon learned there was more to catching wild things than the right bait. Human scent must be a powerful repellent out in the forest on the side of our little mountainous yard, because nothing would come near the trap. Young son worked at moving the trap around, trying new baits, but nothing wound up inside the cagelike wire trap. The only activity he detected was when he tried corn as bait. Deer played havoc with the little basket, rolling it over and eating the corn as it fell out of the bait holder. I think they associated human scent with desert corn, and the trap was disturbed and empty morning after morning, and, even though it was set in place after place around the hillside, it remained empty. Even the raw pecans (still in the husk) which had been broken into repeatedly in the storage bin, were left untouched once moved to the forest.

Disgusted and dissappointed, My son carried the trap out of the woods and set it down on the deck by the front door. "I give up," he said. His christmas present was a dud. The pecans were still in the bait tray.

The next morning I saw the cats staring at the trap, circling with great interest at a distance. When the resident trapper came down the stairs I pointed and out the door he went screaming "'Coon, coon, I caught a 'coon!" He looked at me, beaming.

Now what? The racoon was as large as it could be and still fit in the trap and it was not happy.

I think racoons must have been the voice model for Gollum. The rasping growl is very close to the same, and we were getting a fine dose of it at close range. The son was excited but perplexed about what to do with his capture. It had never dawned on him that there would be a next step, which I suggested might be turning the beast loose. Eventually we did let him go after he was properly admired by everyone, included the renovating crew who were finishing the basement, one of whom offered to eat the racoon for us, even suggesting several of his favorite recipes.

An angry racoon is not much help to someone trying to figure out how to open a box trap without loosing any fingers in the process, but we managed to find the release, point the door in the direction away from us, and watch the racoon fire off into the woods as if shot from the proverbial circus cannon. I was relieved when it disappeared down the hill but my son raced off to reload. For the next several mornings we released racoon after racoon, each morning's catch being slightly smaller and rangier than the previous, until the son decided he was bored and moved on to some other intense adolescent pursuit.

The trap has since seen good use capturing wayward cats all over Roane County, and even a squirrel or two, which were kept as pets by a country neighbor. Out on the deck by the front door, coons still raid the cat food, Extra cat food being simply one more price for living in the woods, but on balance, it is well worth it.

This morning, the grey shape in the tree decided it was time to come down, even though the cute little white dog was still sitting in the leaves looking up. The second it touched the ground with one paw, the dog tore after it and the coon scampered back up the tree a few yards, then leaped out into the air and fell to the ground. It landed already running at top speed, which is pretty danged fast it turns out, but not quite as fast as a small white dog. Some coon tail was nipped but not badly and the racoon found the tree with the hole in it and the excitement was over. Justly proud of his defense of the manse and the entertaining spectacle he provided in full chase, the white dog lies on the back porch asleep.

I know you're wondering exactly how a racoon comes down from a tree. Here's our morning visitor sneaking down the hickory just moments before the chase, which is not recorded for history. It was way too fast but highly entertaining for evryone, with the possible exception of the racoon, who is probably curled up inside his tree sleeping off the effects of a cat food hangover. 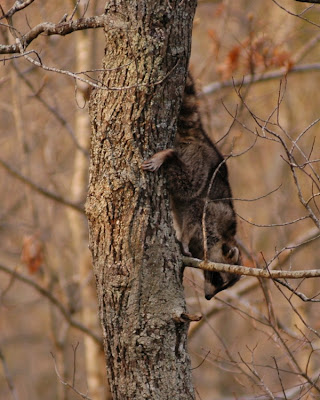 An appropriate quote, given the news:


“With reasonable men, I will reason; with humane men I will plead; but to tyrants I will give no quarter, nor waste arguments where they will certainly be lost.”
Posted by Whites Creek at 10:31 AM