Freedom and the Crowded Theater 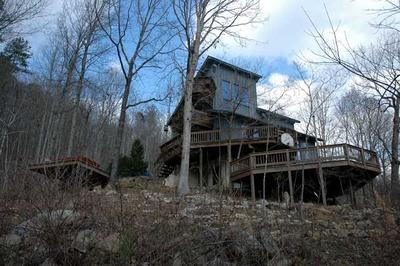 I tried to take this shot again to show the difference between winter and summer, but no way. The house is completely hidden behind greenery.

I ran across something that I knew about but had lost in the dark recesses of my pre-Alzhiemer's cognitve functions. It appears that the Neo-con Junta not only intends to do nasty things in the world but they are so arrogant as to publish their intent.

In America, there is little more precious than freedom of speech. Actually I wrote that poorly...let me retype:

As a blogger, I have the liberty to publish my thoughts, give references and further reading to back up the conclusions I draw, and hope to fortify those who agree with me and change the minds of those who don't see the light just yet.

As a reader, you have the liberty to accept what I write, question what I write, add your own thoughts to the comments, send me a nasty email suggesting that I hate America and just don't like George Bush (50% correct), or worst of all...ignore me alltogether.

The founding fathers and mothers thought that this process was the way to keep the country strong and vital. Freedom of speech, sorry... FREEDOM OF SPEECH, involving political discussions with point and counter point should be the way we come to concensus on how to govern our country. It is the duty of a citizen of the United States to gather information about his country, think about it, discuss it with other citizens, and act on the concensus. Readers of this blog and others are, in part, doing their duty to their country, not by blindly supporting those in power, but by questioning those in power.

You and I are the very "Checks and Balances" set in place by the Constitution of our country. We must consider each other's ideas thoughtfully and act together. In order to do this, however, we must have good information.

Good information is the mother's milk of democracy. Without good and accurate information...Democracy dies!

Those in power rarely allow free and unfettered information to flow, whether the power is held by a large corporation or a president. The very purpose of a Marketing Department is to accentuate certain information and crush certain information. If you want to see how ridiculous this can become, try watching a press briefing by Bush spokesman Scott McLellan.

Commercial media is supported by people who want you to believe certain things and not others. There must be other media venues to provide the information that is intentionally left out and to point out when certain information is plain out false. In America, commercial media must be checked and balanced by alternative media, whether that media is an alt-weekly, non commercially supported radio and TV, or this one...the Blogosphere.

To see how vital the alternatives are, you may simply observe the fierce attacks on the Corporation for Public Broadcasting. Failing in their attempts to destroy it altogether, the Bush administration has placed their own political operative at the head of the CPB. There is an all out war going on between the reporters and journalists at Public radio and TV and the head of the CPB. It has become such a farce that any information that presents the Bush administration or their financial backers in poor light constitutes "Liberal bias". Facts aren't biased, people. The Bush administration just doesn't want you to know certain Facts and will do anything to stop the free flow of uncensored information by which you will make your decisions...And...There are a lot of "Certain Facts"!

The reason I got out the soap box today is a little note from William Rivers Pitt.

The four horsemen of the American Apocolypse are Dick Cheney, Don Rumsfeld, Paul Wolfowitz, and Richard Perle, founders of the "Project for the New American Century".

Here is what Pitt says:

The fundamental essence of PNAC's ideology can be found in a White Paper
produced in September of 2000 entitled "Rebuilding America's Defenses:
Strategy, Forces and Resources for a New Century." In it, PNAC outlines
what is required of America to create the global empire they envision.
According to PNAC, America must:

* Reposition permanently based forces to Southern Europe, Southeast Asia
and the Middle East;

* Develop and deploy a global missile defense system, and develop a
strategic dominance of space;

* Control the "International Commons" of cyberspace;

* Increase defense spending to a minimum of 3.8 percent of gross domestic
product, up from the 3 percent currently spent.

Item one is the disguised reason we are at war in Iraq...They want to move our bases to where they can control the oil and oil pipelines of the middle east.

Item two is bullshit for enriching Haliburton and Carlyle Industries.

Item three is the incredibly stupid fantasy known as the Star Wars Program which has never had a single successful test but has been deployed at a cost of Billions...which went to G.E. and Carlyle.

Item four is the world wide destruction of FREE SPEECH.

Item five is totally redundant, merely representing a rough estimate of how much they planned to steal from the American treasury and give to Halliburton, Carlyle, and G.E.

As an American I feel deeply the duty described by Edward Abbey:

"There comes a time when a Patriot must protect his Country from his Government."

The very idea that there should be limits to the presentation of ideas and facts should be deeply abhorent to any real American patriot!

Does this mean there should be no limits to free speech? I believe it does. But I also believe there should be consequences for those who use their Freedom of speech to lie. The example often used is "Shouting Fire in a crowded theater". Advocates of suppression would say you don't have that right. I say you do...but you ought to have your ass kicked if you do it. Knowing you will have your ass kicked should prevent you from doing such a stupid thing.

The Downing Street Memos give us a similar example. President George W. Bush led us to war on the pretext of false information concerning the mythical WMD's that Saddam was going to use against us..."A Mushroom Cloud" he shouted into the crowded theater of a frightened America. Events proved him wrong, the Memos proved he lied. All of them lied. The President And the four Horses Asses of the Apocolypse.

If they had their way, you would never hear this from me. George W. Bush, Dick Cheney, Don Rumsfeld, Richard Perle, and Paul Wolfowitz hate FREE SPEECH!

We will now kick their collective asses.

Info on the PNAC:


Really Scary Stuff
Posted by Whites Creek at 7:50 AM