More swamp pictures for you (just to make you guys totally jealous).

You may be wondering why these guys are looking at a map. The river only goes one way, after all. Turns out we weren't exactly lost, we were just in the wrong state. 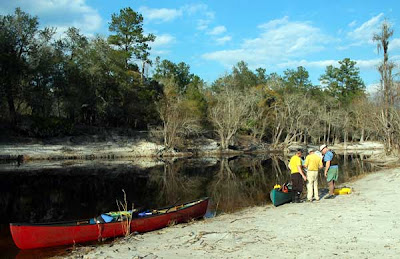 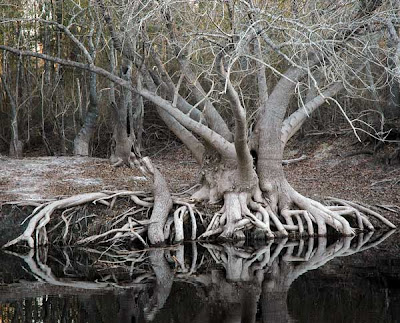 This grand old tupelo tree stood watch over the pool next to our campsite. There were thousands of them, including the one we call the "kid tree", which is actually thre trees grown together and is big enough that it is an island we stopped to let the kids climb around and play in on a previous trip. That time we only paddled three miles of the river but it was so beautiful that we vowed to come back sometime, and so we did. 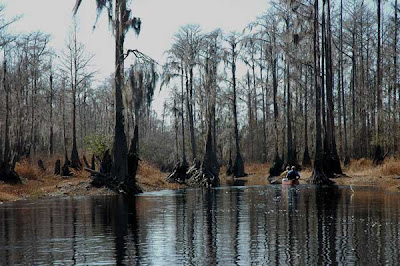 People have the wrong idea of swamps. As you can see, this one at least is pretty open. At other points in the Okefenokee, the trees close in around you but it never seems oppressive to me, just alive. If you ever want to see just how alive the world really is, tie up a canoe in one of these places and sit quietly for 20 minutes. If you are still enough you'll be right in the middle of a very happening place. 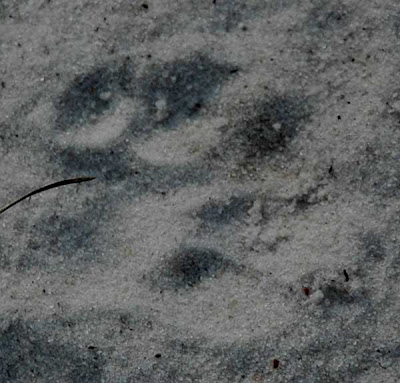 There were tracks were all around us on the sandy beaches. Several times we saw the large kitty prints of bobcats, four toes and round. I took this shot because it had five toes. Looking in my references I figure that this one is an otter. In deep sand, there is a hint of the claws but not much.
I'm ready to go back.
Peace,
Steve
Posted by Whites Creek at 8:36 AM