The Ballad of Old Swamper Steve is playing in the background, and just in case you guys were wondering why I haven't been pestering you with outrage and rant, here ya go:

First paddling day was inside the Okefenokee Refuge. We had to get a permit to go over/under the Sill, which is a long levee built to fix the damage to the swamp done by repeated efforts to drain it. We were the first people this season to paddle through the "narrows" from Stephen Foster State Park to the headwaters of the Suwanee River. Two weeks earlier we could have walked most of our first day without getting our feet wet. The dry season is fire season in the southern swamps but that ended with one storm just before we got there. The lower Suwanee had been at near record low water but not anymore.

Charlie and I paddled together with me in the stern mostly. Once we got through the long winding narrows, an old ditch barely wider than the boats, we hit a stretch of open tall grass freshwater marsh where this old Cypress is home to an osprey or eagle nest in the very top. 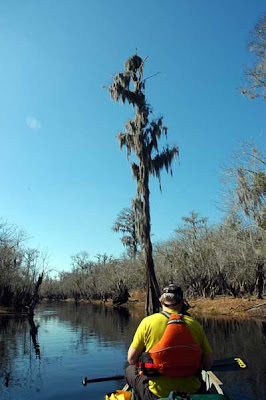 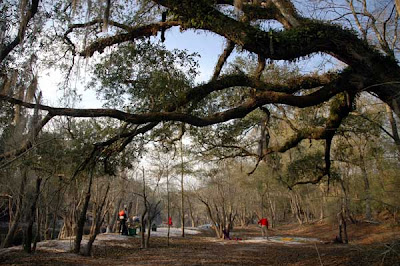 This Live Oak graced our second night on the white sand beaches below Fargo, Georgia, just before we paddled into Florida. 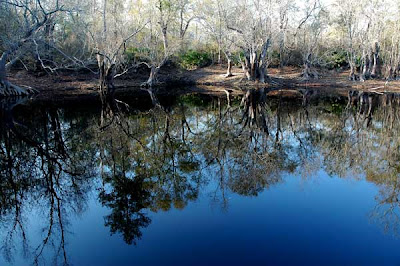 Morning and the fish were tearing up this pool surronded by grandaddy Tupelo trees. We had nothing to fish with but have made a note for next time. 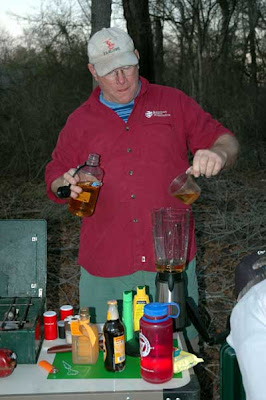 Ok, This was the last thing I remember that night. Gordon and his magic hand crank blender and the new margarita recipe involving Gran Marnier, Cuervo Gold, lemonade, lemon and lime juice, and beer.
I swear! Beer!
What I don't have pictures of are the herd of otters that barked at us a we passed, or the gators that slid into the water as soon as they saw us, or the wild hogs, or the great horned owl, but most of all...I don't have a picture of the Puma that ran across the road in front of us while we were running shuttle. Big, grey, long tail curled up at the end...But no picture.
You'll have to do with Gordon mixing Margaritas.
Peace,
Steve
Posted by Whites Creek at 12:34 PM