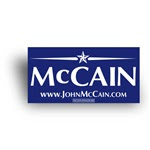 Something I've noticed about John McCain... Since RED is ugly right now...He is trying to be BLUE.


John McCain is running away from the Republican Party so hard that his colors are running, too. Little John must be trying to confuse voters into thinking he might be slightly Democratic or Progressive (not necessarily the same thing), or...a maybe Maverick.

A "maverick" is a lost cow, by the way. One that refuses to run with the crowd. If Little John voted with President George W. Bush 95% of the time, would the 5% be enough to call yourself a maverick?

I don't THINK so.

Do you think this is a plot to steal the election by pointing at the electoral map on the evening of the election and saying, "All your Blue States are belong to ME"?

If I have any advice for Obama's campaign staff, it would be to paint McCain RED...The Red of Fascism and the Republican Party...The Red of corruption and selling your Country and its Constitution for the sake of Corporations...The Red of Lobbyists...The Red of War and the Red of the blood of a million innocent civilians in Iraq. The Red of lie after lie and the war that may well destroy America's economy.

John McCain cannot steal BLUE!... He is red...through and through.

If McCain paints his stickers and his yard signs and his campaign BLUE... Wouldn't that be a lie?


Blue is for Progressive. John McCain is a half assed Conservative, even if he does lie like one.

If we let him have BLUE, the next thing he will try to steal will be GREEN.