President Obama enjoyed soaring approval ratings as he took office but now, with the ratings hovering just below 50%, Elected Democrats seem to be shuffling away from associating themselves from him. My Congressman told me that Obama polled 34% in the last election so he had to distance himself. What drivel!
Here's the not quite worst US President in history's approval ratings for his two terms. It is fairly obvious that had W not started his unwinnable wars after the 9-11 tragedy his approval ratings would never have seen daylight. In fact the case is easily made from looking at the chart that Bush's incompetence, even though he was strongly warned, in preventing the 9-11 attacks was the best move of his Presidency for conservatives who were Hellbent on destroying America's Middle Class. 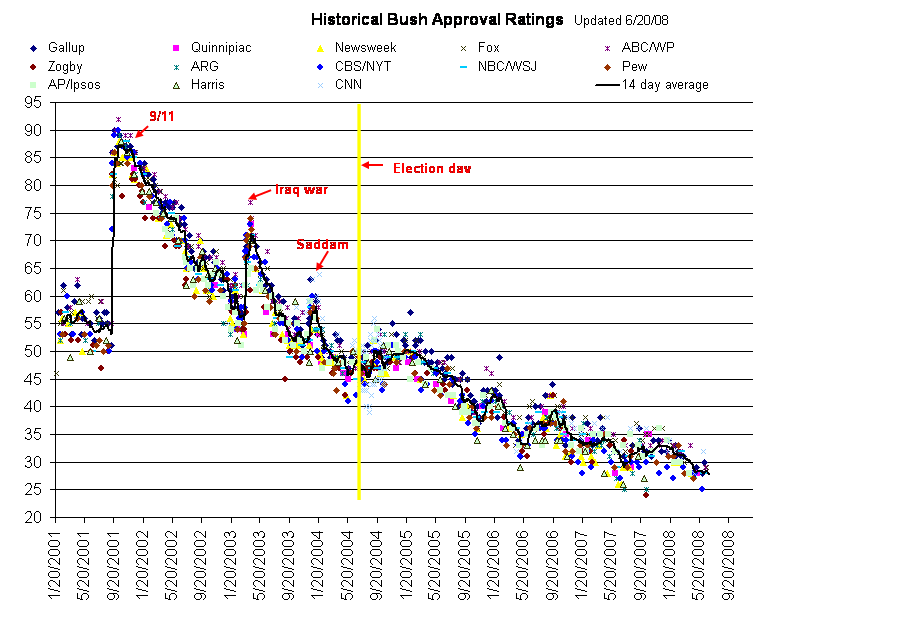 George W Bush was reelected with a sub 50% rating. There were no Republicans running away from him. One thing about a crime family...they all point their guns in the same direction when they are under fire.
So stop and think for a minute what the greatest accomplishments of the Bush Administration were. Can't think of anything good, can you? Well, unless you were a rich person who hates America and don't want to pay your fair share of the cost of protecting your hoarded gold. Or, and this one bothers me a lot, you are a Multi-National Corporation that sees American laws and regulations as a barrier to obscene profits, jobs and health of the actual Citizens of our country be damned!
So what are we seeing right now with regard to our President and his agenda to save what's left of America, Of the people, By the people and For the People? We see certain turncoat Democrats as his greatest obstacle. Between lockstep Republican opposition to Obama's legislative agenda and turncoat Democrats, It is a wonder that President Obama has gotten anything passed and yet he has.
We have the first step in a viable healthcare system that works for the actual people of this country instead of the stockholders of Health Care of America.
The tragic wars of George W. Bush are winding down. Torture has been stopped and the targeting of civilians  in rocket battles has been ended (a year ago, actually).
We have a sensible Administrator of the EPA in Lisa Jackson. We have highly qualified Supreme Court nominees in the pipeline (and don't pretend to me that John Roberts was qualified for the head Justice position under Bush...No freaking way). Justice Sotomayor has proven to be excellent on the bench.
And we have the first steps in reforming the financial system which has wreaked such havoc on our country and its citizens.
This took, say, 18 months. Hey just for grins name the accomplishments of W in his first 18 months? I mean other than allowing the most tragic terrorist attack on American soil in history and then attacking the wrong country...
OK, so we are reading breathless newspaper articles that say 40% of Americans are dissatisfied with Obama's performance but let's think about that shall we? If you add in the additional 20% who look at Obama's record of rather historic accomplishment and say he hasn't done enough yet, Obama is actually riding a 60% favorability curve. In any mock election poll against any Republican candidate, Obama destroys his opponent. America might be unhappy with Obama but they are still really pissed at Republicans.
In any event, Barak Obama's real enemy is not the Republican party, evil and onerous as they are. My and your and Obama's real enemies in restoring America are the traitors in his own party. Who would have ever believed that it was a Democrat, Senator Ben Nelson, who took unemployment benefits away from 18 million American workers whose jobs were sent overseas or lost due to Bush Administration actions.
Barak Obama's real enemies are the Democrats who lack the spine, the courage, the whit of common sense that has them tucking their tails between their legs and whining about the President's approval rating. Cowards, the lot of them.
Peace,
Steve
Posted by Whites Creek at 9:47 AM