The Flycatchers are nesting. When we built the lower deck, we had no intention of making nest boxes for them, but that's what happened and that's just fine with me.

Since I put the screen over the chimney to keep the swifts from winding up looking out at me through the glass doors on the wood stove, we haven't had them around. They have apparently found a good spot to nest because they're back to their old aerobatics at dusk. I can't wait to see the formation flying that they do when the young have fledged.

The Cardinals have a nest in one of those bushes I can't name. it's right by the path down to Lake Steve and the poor momma startled poor me as she scurried off the nest as I walked by... Choosing a different route for a few weeks.

The eagles are flying up the creek several times a day carrying things. I assume there's a nest up there but good luck finding it without a helicopter.

A different scarlet Tanager hung around for a couple of days. The ugliest one I've ever seen was stunning but this one was head and shoulders above anything I've ever seen. The normal red was so bright that it was more of a flame color. I didn't even think it was a tanager until I got the binoculars.

(I really need a 600 mm lense...I mean Really! It would be soooo useful for those thirteen seconds every year when the tanagers pose for me. Doesn't that seem worth it to you guys?)Here's a poor shot of the earlier tanager: 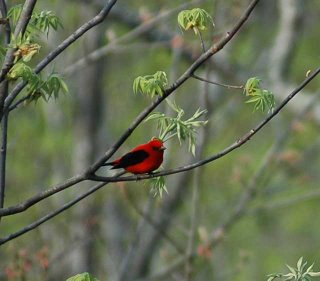 The indigo buntings are coming to the feeder. That's unusual, but really nice.

It's Spring and the weather is...well, challenging. It takes several layers and a rain coat which you will need ,and then not need, and then need, again to go hiking for any distance. I'm here to tell you It's all worth it.

....I do not think George W. can be put together again... Rove's only option is go negative against the Democrats -- no surprise there. At this point, they could attack Democrats on almost anything, but that would leave the large question,

Molly
Posted by Whites Creek at 9:04 AM