We have an abundance of wildlife in Tennessee, and too often we overlook the little things.

One of the things I love about where I live is the many butterflies that cruise the gorge. We rarely use insecticides in our garden and there are no farms close by, so other than the aerial pesticide spraying of the timber companies, the absence of chemicals allows things to proceed in the natural order, which can be pretty strange at times.

A few years back I was looking at a Tennessee Conservationist magazine and reading about the Diana butterfly, which was supposed to be rare in our state, only found in four counties high in the Smokies. Looking at the photos I thought that we have those things running around our yard, and grabbed my camera and set out into the yard to prove it.

Turns out there are a lot of butterflies that mimic one of the big swallowtails that is toxic to birds. I found out what a "red spot purple" was, and several swallowtails before I managed to get a shot of a poor old beat up Diana female taking sustenance on the butterfly bush by the driveway. But Diana's are strange as they are beautiful. The male and the female look nothing alike and frankly don't hang around together. What's odder, they don't even come out at the same time of year, for the most part. So how do they, you know, get together? That's what I'd like to know. Butterfly sex has always been a big curiousity of mine...(Not really)

The male Diana is a stunning dark chocolate inside bordered by Tennessee orange. They emerge earlier in the Summer than the girls do, but apparently there is enough overlap for them to get together in a short Summer affair. The boys die off and the girls last until late Fall, depositing their eggs in the violets that are their only food as a caterpillar.

These shots were taken yesterday in Roosevelt State Forest just a few hundred yards from highway 70. Sorry they are not perfect. The boys are fairly hyper and don't like to hold still. The Natural History photographer even got in trouble for chilling a male down in a cooler and posing him on a flower. 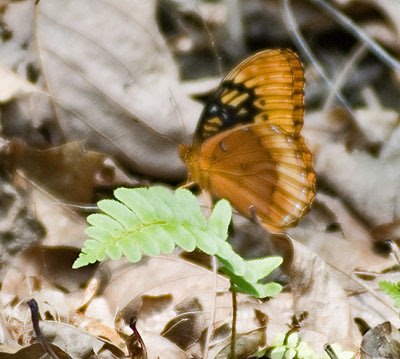 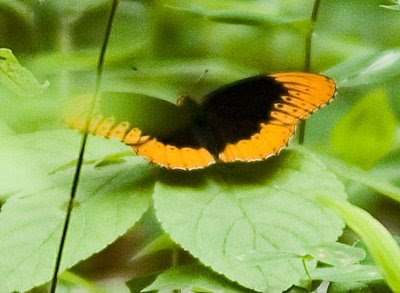 We hiked through Roosevelt Mountain State Forest yesterday and saw Diana males several times. I'd already seen one or two in the yard but the road we were on seemed to have bunches of them. We were hiking to the boundary line of the state forest to put up signs quoting the law making it illegal to ride atv's on private land without permission and asking folks to please not do it, as they were destroying the peace, beauty, quiet, and the roads and forest playing with their toys. We noticed several "No Motorized Vehicles" signs the state rangers had put up by the atv trails ripping up the banks and hillsides, and figured our signs would have about the same effectiveness until we have somebody arrested. It will probably come to that, but I hope not.

After posting signs for our neighbor on his land, we were rewarded with views of the stunning forest in Roosevelt as we hiked back to the truck. Roane County could have as nice a hiking trail system as there is anywhere in the Smokies if folks would just quit destroying it.

Last night, lying in bed, we were awakened by the roar of ATV's on our land. 12:35 a.m. the clock said. I supposed it was a group of folks just "enjoying the wilderness". I thought about the fact that they would have had to come by several of our signs asking them not to break the law, and please respect our property. We don't post "No Tresspassing" signs, just "No motorized vehicles." Is this too much to ask?

Earlier that evening I had hiked up to our border and spoken with several riders who said they had seen the signs but came through anyway. I took their picture and said we would maka a case against them the next time they rode in. They all said they don't blame us one bit. One guy with a cooler strapped on the back of his mud covered ATV said, "I can't believe how people have torn this place up."

Here's a Diana female from Whites Creek gorge taken two Falls ago. The pictures are nice but you have to see them in real life to really appreciate their beauty. 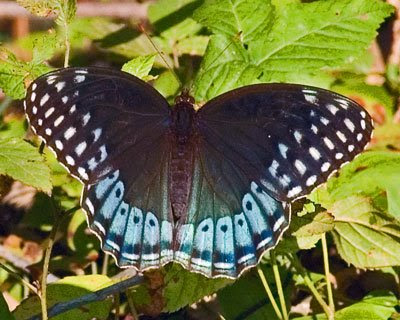