First of all I want to note that Governor Bredesen has been awarded the National Humanitarian Award for his work in preserving Tennessee's natural heritage.

I'll talk more about that later and will try to link to the actual announcement if I can find it.

As part of the Governor's Land and Water Forum, we were taken on a tour of our newest state park at Devilstep Hollow. It's 12 miles South of Cumberland Mountain State park but is not yet open to the public. The driveway crosses private land and a new easement is being purchased and developed.

The farm is beautiful, sitting at the very head of the Sequatchee Valley. Grassy Cove is on the other side of the massive sandstone ridge which separates the two valleys,, which are geologically the same.

Here is the Devilstep Hollow sinkhole where the cave is located. 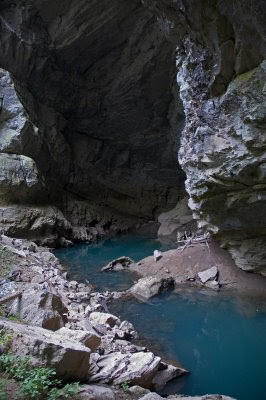 This is where the Sequatchie River flows out of the ground at the Devil Step Hollow farm, a few hundred yards from the sinkhole. 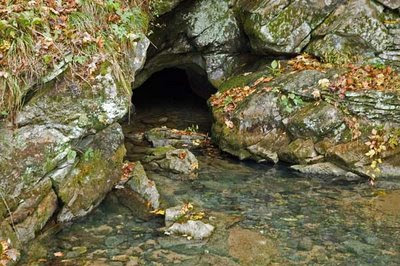 I'll try to add more photos of the actual conference as I have time. There is some great stuff going on in Tennessee that will improve and preserve the beauty of our state for future generations. As a result of Phil Bredesen's personal commitment TDEC Commissioner Jim Fyke made this announcement,

"Governor Phil Bredesen has been selected as the National Recreation and Park Association’s 2008 National Humanitarian Award winner for his work to preserve and protect Tennessee landscapes."

Fyke nominated Bredesen for the award, which NRPA presents to an individual or organization whose concern for humanity has been expressed through park, recreation and conservation efforts that enrich people’s lives. 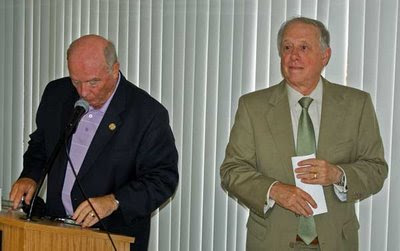 The one worry I kept hearing from the folks in the room is what will happen after Phil Bredesen leaves in two years? He has set the bar very high for the next governor, and folks are concerned that Tennessee may return to the environmentally indifferent years the hallmarked the previous administration.

Phil Bredesen will be a hard act to follow.

Update: The Link
Posted by Whites Creek at 7:11 AM