It's Fall, leaves doing their thing, football games, beer, and songs that feature a tuba player.

We had sworn a solemn oath to go to a college football game while our son was still a student so when Clemson (his school) hosted Georgia Tech (one of my schools) it was time. It didn't hurt that Walhalla, SC was having Octoberfest the same weekend, or that you have to go over mountains to get from East Tennessee to West South Carolina and the color is quite nice this year.

In most of the rest of the world, drinking beer on the streets during festivals is not only allowed, but encouraged. In Roane County it's illegal except for certain legal loopholes that I won't mention lest the church bretheren rabble rouse to close them. Walhalla solved the legal problem by recognizing a big funeral tent as a legal bar under which beer may be served and consumed for four days every October. They started with "near" beer, moved up to "all three kinds" Miller, Bud, and Bud Light, and now have a fine selection of actuall beers to choose from, as long as you stay under the tent with the band.

The tent gets rather crowded, the band has a dance troup and some cow bell players, the crowd gets dragged onto the floor to dance, vendors line the park, and the town makes 25% of it's sales tax revenue in this one weekend for the entire year. It's a tourist destination now. I talked to the man who has been putting it on for over 25 years and he said it was a hard sell at first but now, even the church people love it. They set up booths and hand out literature.

It's a love fest of a different sort, but they had shuttles and vans to haul folks home if need be, and the cops were amazingly friendly and helpful. The only complaint I heard was that the beer tent needed to be much larger, since you had to stand under it to consume. The cops overlooked the fact that the crowd grew bigger than the tent and all was well.

East Tennessee could use a visionary small town that could put on an event like this. 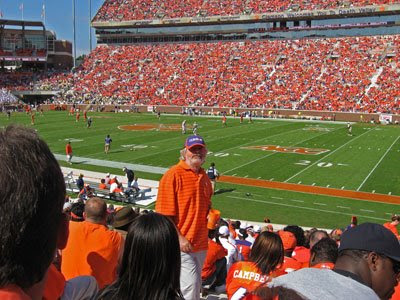 Our tickets were courtesey of the Clemson Tiger mascot and were in the section with the player's family. I was warned to wear orange and not to cheer for the wrong team. Actually, since it was the first game after Tommy Bowden got fired, I was pulling for the Tigers, who almost pulled it out in the last minutes.

And for you political junkies, here's the biggest event of the week so far: