In the 17 years we have been here, we've never camped down by the Whites Creek.

There are several reasons, not the least of which is that living in our house is pretty similar to camping out except for the satellite dish and refrigerator.

The larger reason has been that we have had an open land policy and have not wanted to deal with some of the people who go to the creek. Recent events have pushed us over the limit and we are now in the process of eliminating ATV access to our land due to the intolerable destruction and mountains of trash we've been left as gifts. As a result, it has been much quieter, although we still had a group of ATV's come through at midnight, driving right past the signs that asked them not to do that on private land.

Our neighbor on the Cumberland County end of our yard has had enough also. He tried blocking off the parking area ATV'ers had made on his land. They pushed his fence over and someone shot and killed his son's pet Lama while it was grazing in their pasture. He is the wrong man to anger and I hope that the person that did that awful deed will remain unknown, for the sake of his own health and to keep my neighbor out of jail for what he might do. He is a man that believes in retribution, but he will start with a strong gate and a polite sign.

So after posting signs on our own property, having them torn down, reposting signs on our own property, and talking to a score of riders who said, "What signs?", we have quieted things down a bit and decided to go camp by the creek in one of the places that intruders had, without permission, chainsawed out on the bank. There were two reasons for choosing this spot, one was to be where we could talk to the midnight riders if they showed up, and two, once we had cleaned up all the trash...It's beautiful!

There is a perfect time to camp by Tennessee creeks. The temperatures need to be cool enough to stand when you're out of the water and and warm enough to enjoy when you are in the water. It was perfect on both counts.


We hiked and swam and and picked up trash. And then it was time to be quiet and listen to the world, as evening settled in. The songs of the wood thrush were incredible. (listen) Once we were sitting on a rock with our legs in the water sipping a beverage, and we heard a grunt above us. Looking up we watched a mature bald eagle fly by, not 20 feet above the water with its mouth open and head turned to look at us as it passed. Of course I had just put away the camera.


As it evening passed into night, other sounds started up. In the woods on the side of us away from the creek came this obnoxious rasping "wahhhhhhhhhhhhhnk", a pause, and then again. It was echoed from other places in the woods up and down the creek bank. Then it was closer...coming right at us. "Wahhhhhhhhhhhnk" And again...And then it stepped out of the woods into our camp site, all one and a half inches of it. It would call and scurry a few feet toward the water's edge, sit for a bit, and call again. The little Fowler's toad male inflated his air sac with each call, oblivious to our headlamps shining on him, as we laughed each time he called "wahhhhhhnk" into the night. Other toads had made a similar journey from up in the woods down to the water and now the creek was a noisy place with several species of frogs and toads doing what is is that frogs and toads do in the night.


This is looking downstream toward our house, which is on the other side of the far ridge on the left. 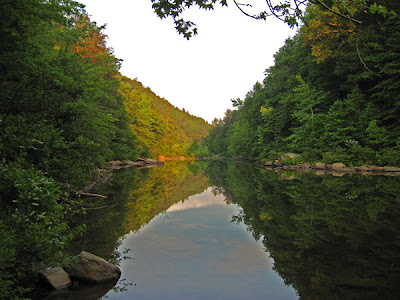 Looking upstream from camp. Looking through the clear water at the bottom, it is easy to see why this spot is called "Flat Rock". 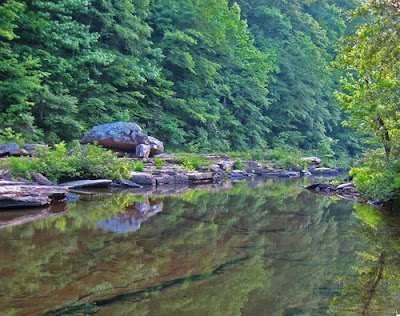