The 15th Amendment was ratified in 1870. It states that the, "right of citizens of the United States to vote shall not be denied or abridged by the United States or by any state on account of race, color, or previous condition of servitude."

The women's movement had strongly supported the abolishment of slavery but split with the abolitionists movement when it supported dropping women's rights from that amendment.

It would be 50 more years before women would get their amendment allowing them to vote. 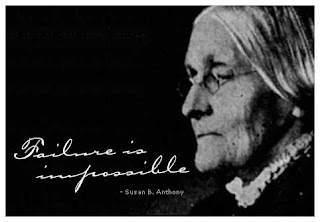 Susan B. Anthony died before the 19th Amendment was ratified. She wrote several thoughts that are often quoted today...

I always distrust people who know so much about what God wants them to do to their fellows.

If all the rich and all of the church people should send their children to the public schools they would feel bound to concentrate their money on improving these schools until they met the highest ideals.

Steve
Posted by Whites Creek at 8:47 AM