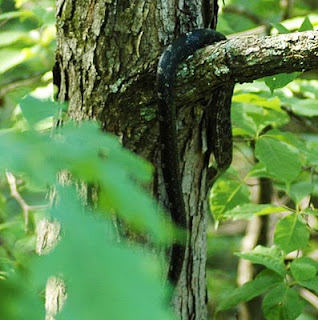 So I grab the camera and go down there and see the babies start flying out of the nest box, only flying is not exactly what they did...More like falling out of the nest while flapping their little blue wings for all they're worth. It is a matter of life and death, after all.

Mom and Dad did an amazing job on the black rat snake and drove him out of the tree with such vigor that he dropped the last ten feet in a free fall to get away from them. With the snake dealt with they turned toward me. I tried to stand without flinching as they flew right at my head, blue missiles out of the sun. They came right at me without so much as veering an inch until they were literally two feet from my head and I flinched.

It's a dangerous world out there but here's hoping! 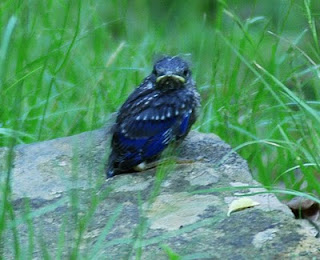 As the morning has progressed I've bashed the cat to make it turn loose of one baby and pried another baby out of a black racer's mouth. Both babies are still out there being fed even after the trauma. The racer got loose and disappeared under a rock. The cat will probably hate me until supper time when it hears the can being opened. 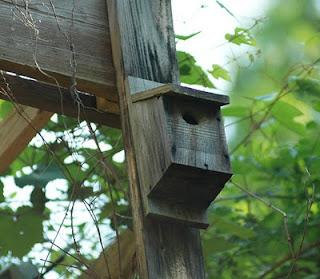 Here's hoping the parents move the babies away from the nest area which seems to have collected more than its fair share of predators. Other than my cat guilt, the only threat I really begrudge are the blue jays. They just kill other bird babies, for what reason I don't know. 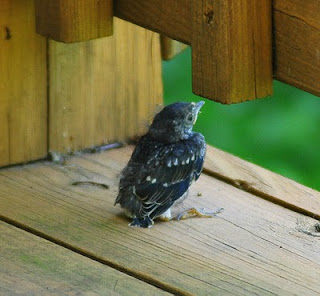 This is the last straggler, which I nudged off the porch to get it to join the rest of its siblings. Stupid me, there was a snake waiting below and I had to run around and make up for my interference by transporting the serpent to the other end of the yard. This particular snake is one I've interacted with before so it was unperturbed even after being carried around until I poked it a little to make it hide.

It could be that I should have dealt with the cat and left nature to deal with the others. Five babies may be too many for a breeding pair to raise safely. I'll just watch from here on out.
Posted by Whites Creek at 9:53 AM