In a past life I hung around with zookeepers and animal folks of various sorts. One of the axioms of interacting with animals is that you can't house train creatures that live in the trees. Sure that parrot on the shoulder looks cute but check out the back of that Pirate's shoulder and you'll understand what I mean.

Hiking in Costa Rica I smelled something that reminded me of the woolly monkey I tried to keep once a long time ago. Looking up into the jungle canopy I saw this: 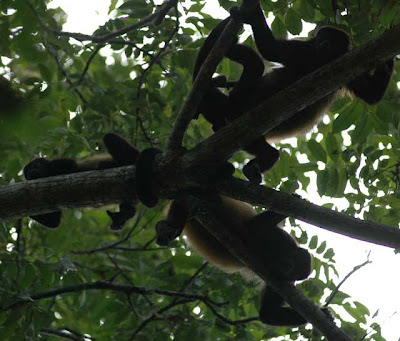 I was reminded of that during the heavy rains of the past few days. I went to look at a nearby whitewater creek and saw plastic bottles float by.

Are humans incapable of being trained to deal with their garbage? Do they feel like they can crap in the water and it just goes away, no problem? Do they realize that when they throw trash down on the side of the road that it will wash into our waters during the first good rain?

Eventually, the plastic garbage we don't deal with washes into our streams and into our rivers, and into our oceans where it could join the massive bowl of plastic soup that has become larger than the United States and is now a treacherous ecosystem all its own.

Fascinating reading from the journal of a research ship:

"The garbage patch barfs, and you get a beach covered with this confetti of plastic," he added. The "soup" is actually two linked areas, either side of the islands of Hawaii, known as the Western and Eastern Pacific Garbage Patches. About one-fifth of the junk – which includes everything from footballs and kayaks to Lego blocks and carrier bags – is thrown off ships or oil platforms. The rest comes from land.

Follow the Voyage
In the meantime...Try to Earth Break a human near you.
Peace,
Steve
Posted by Whites Creek at 8:12 AM