I'm so outraged today that I have decided to let others do my talking. So here today, let us welcome the WhitesCreek guest Bloggers, Jay Leno, Conan O'brien, and Mother Nature.

First a little bit of info on the Koran flushing incident. Newsweek was not the first to bring this to the world's attention:

The Newsweek report was not the first public airing of allegations about U.S. personnel at Guantanamo Bay desecrating a Quran. In August and October 2004, there were news reports based on a lawsuit and a written report by British citizens who had been released from the prison in Cuba. They claimed abuse by U.S. guards, including throwing their Qurans into the toilet.

In January, Kristine Huskey, a lawyer representing Kuwaitis detained at Guantanamo, said they claimed to have been abused and in one case a detainee watched a guard throw a Quran into a toilet.

"The Pentagon announced they are closing more than 150 military bases around the country. If the Bush administration wants to close military bases, how about we start with the ones with Iraq?" -- Jay Leno

You know when President Bush first thought about closing bases? When he was in the National Guard." --Jay Leno

"John Bolton is in danger of being rejected by the Senate because he's known for abusing subordinates and frequently losing his temper. Today, President Bush announced his second choice -- Coach Bobby Knight."
-- Conan O'Brien

"President Bush came out today for alternative fuels. He said he looks forward to the day when American invades a country for its soybeans." --Jay Leno

"This is absolutely true. During the scare Vice President Cheney was inside working while President Bush was outside riding his bicycle. So it was a typical day at the White House. Remember the last time this kind of thing happened, he was reading a children's book. This time he was riding a bicycle. How old his he -- 12? ... You laugh but as soon as they gave the all- clear he went into the kitchen to make himself a peanut butter and jelly sandwich." --Jay Leno

And Now let us all welcome Mom Nature...Yayyyyy!

Anybody remember the dogwood branch that had the small gray lump on it? I said I would try to get a better shot and tell you what it is, so here is our Cope's Tree frog that lives in the dogwood. As far as I know it has lived in the suet feeder for the last two summers. From the calls we hear, I think every tree has its frog. Great camo, eh? 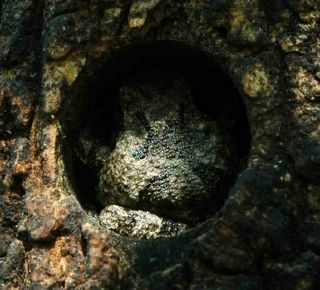 I was laying out a preliminary route for a walking trail along a small creek yesterday and came across this little beauty. I could use some help identifying it, but it looks to me like one of the milkweeds... Small, about a foot tall, with four opposing oval leaves. Let me know what you think. 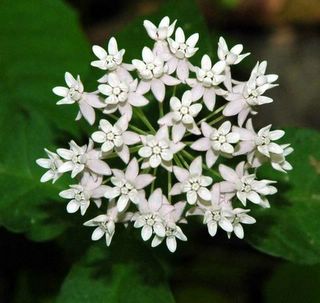 Steve
Posted by Whites Creek at 8:44 AM