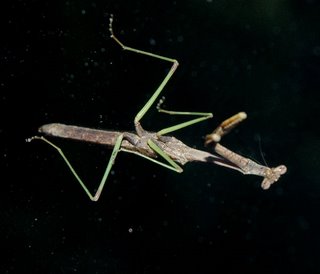 There's mist on the mountain and a preying mantis on the window glass.

Mornings after the storm are a gift. I've tried to photograph the mist monsters crawling over the treetops on the other side of the gorge but it just doesn't work. It will have to be my private heavenly moment. You folks are certainly welcome here but you'll need to be quiet, thankyou.

Heaven is passing through.

My Brother went through a "spiritual" phase in which he followed a guru who said that heaven is a perceived thing. I think the guru wanted my brother to send him money so he, the guru, could perceive a lot more heaven on a personal level. When you die, you die, the guru proposed. Maybe you come back, maybe you go somewhere, maybe it's over...Who knows and what difference does it make? (I proposed) So you get your heaven in these moments which you're supposed to appreciate and make last as long as you can. People seem to spend way too much time making themselves miserable and not enough working on happy.

Anyway, heaven is another word for reward, and rewards don't mean all that much if they are easy or happen all the time. My slice of Bob's Mom's coconut pie is my reward for knocking down my veggies all week and skipping a meal or two. If all I had to eat was Bob's Mom's coconut pie, no okra, beans, or pork turnip greens...Well that wouldn't be a reward, it would be hell, in a small way. So life has to suck enough for us to appreciate the times when it doesn't.

The storm knocked out the power for a couple of hours last night, but it came back on right after we got all the candles and lamps going and found the flashlights. We're at the end of the line so we are experienced in the ways of power outages. The candles got just hot enough to smell good and supper was nice, just me and the woman who puts up with me and a nice evening after a good storm. Maybe the guru was onto something.

This morning I studied the mantis on the window, fat from the moths attracted to the house lights, and I thought about life and heaven. I think it is a male Carolina mantis, which means that he's looking for a girl he can seduce, have sex with, and die. Life for him is just like it is for the rest of us...Eat, survive, reproduce...and provide an extra shot of protein for the mother of his children, which is to say he gets laid and she eats him alive...not unlike some human relationships I've noticed, but undesirable from my vantage point. Still, it's his moment of heaven, and he's perfectly willing to die in payment for it.

Steve
Posted by Whites Creek at 8:23 AM