I have a picture of now Senatorial candidate, then Governor of Virginia, George Felix Allen standing with my wife and kids. He's beaming at the camera in fine politician form and my sons are looking at him in that childlike expression of "who the hell is this guy?" There is a second picture of them with Willard Scott taken at the same event. My wife's cousin is the NBC producer in charge of Willard, who was the very first Ronald McDonald. George Allen's antics have proven that he is worthy of being in the company of other clowns.

You may remember George Allen as the guy who called a brown skinned cameraman "Macaca" at one of his campaign events in rural Virginia. That word just happens to be a racial slur common in his momma's home country of Tunisia. George is big on having his picture taken with all sorts of people, including a fine group of Virginians called the Council of Concerned Conservatives known as the CCC. Here's part of their manefesto:

Yep...a fine bunch of bigot's, I'd say. This is a problem for conservatives. How do you maintain your bigotry while driving your country into a right wing fundamentalist "Christian" theocracy? Changing the initials of your organization to CCC from KKK won't be enough. This requires monumental hypocrisy!

Hypocrisy on the order of magnitude of, say, painting pictures of Jesus as a white guy!

Hypocrisy on the order of being prejudiced against Jews and then, after claiming to be "just like you" to people who hate Jews, having your own mother, the one you first heard the term "macaca" from, tell you that she is a Jew. She hid that fact from you and her husband's entire family because of their family bigotry. This has to be tough on George Allen...All your life you look down on Jews and brown people and now your 64 year old Momma tells you that you are one. Or one half of one, actually.

The General nails it for George Felix Allen: 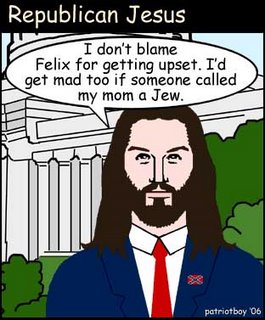 The CCC now says they actually didn't endorse him and they don't know who let him in to their meetings anyway.

Steve
Posted by Whites Creek at 8:28 AM