My other cabin is in South Carolina near Seneca where my boys were born, and so, as chance would have it, was John Edwards. He came home to see his Mom and Dad and stopped by the new Democratic Campaign headquarters to cut the ribbon.

I've heard his speeches before and I'm a fan. He's different.

His events are not a rock show or a tent revival. It is so refreshing to hear someone ask for help getting the work done, rather than "elect me because those other people are mean"...Even though some of us think that.

Since the event was at the Democratic headquarters, they had to display campaign literature and posters for all the candidates. Hillary was prominent, as were Chris Dodd and Barack Obama. One good Democrat even had a Hillary campaign hat on. Edwards shook his hand just as enthusiastically as anyone else's. The guy really smiled back at John Edwards and watched him intently as he went through the crowd.

One other thing I noticed was the diversity of the folks. Every demographic was there. Old, young, girls, boys, men, women, Hispanic, Black, White, and other. The Vets were there and so were men and women still on active duty. I talked to one who was standing smartly in beret and camo who said he had heard about Edwards and had to see him.

"What did you think?" I asked him. 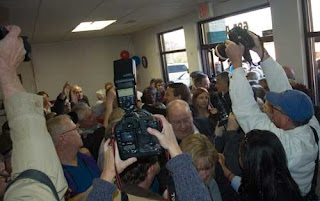 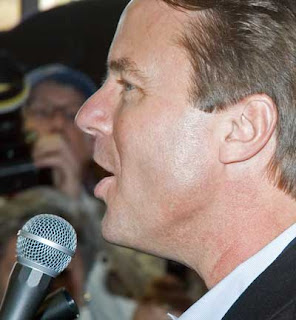 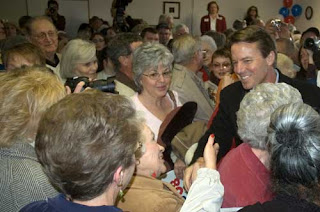